Experience comfort while transiting between cities

Tranquility combined with security in a relaxing travel environment

The first class is yours!

Experience comfort while transiting between cities

With shuttles that can leave and follow each other on very short intervals, each of them carrying between 60 and 70 people (depending on the shuttle’s layout), the system capacity can reach more than 50 million passengers per line, per year. The system behaves much like a treadmill. Shuttles can be initially grouped up to five, then distance themselves quickly so to avoid overweighing rails and pylons.

Presentation of a 60 passengers model (56 in business class and 4 in first class). 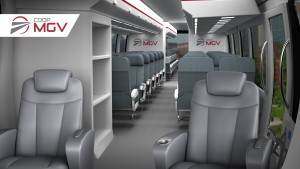 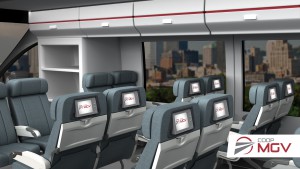 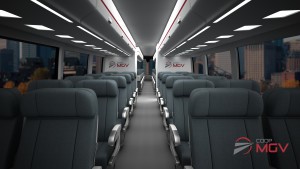 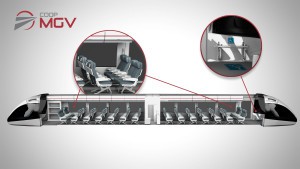 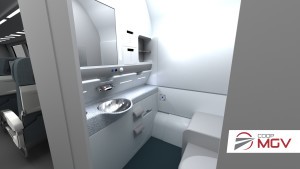 Some amenities have been added:

Market studies show that, on the first Montreal-Quebec City operating line, an influx of 10,000 to 15,000 passengers per day is realistic and remains largely below the monorail transport capacity. It’s also easy to add, into a regular MGV traffic circuit, specially adapted shuttles for shipping goods which will be used off-peak hours, particularly during night time.

The system is flexible, scalable, and can be just as effective at low speed. For example, in urban areas, MGV can serve suburbs at a speed that better suits distances between stations. Its rapid acceleration capability enables it to serve more stations in the same area while maintaining a high speed service. With a departure every minute, one 60 passengers shuttle system can transport on each line up to 45 000 passengers (in both directions) during the six peak-hours, morning and evening combined.