Rapide transit for the whole family

Everyone is invited to contribute 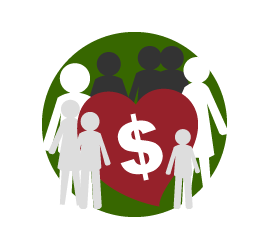 The MGV is a laudable means of public transport for the whole society. From conception to construction, thousands of jobs are created. It is profitable for members of the cooperative, businesses and the public.

MGV contributes to the economic growth of a country. Since the MGV is designed to serve the less densely populated regions as well as the big cities, everyone benefits from this public transport. In this way, the regions will benefit from an increase in the property value of the land adjoining the station.

Companies and professionals will benefit from the construction and maintenance of the infrastructure. Thousands of jobs will be created by this large-scale project.

In addition the MGV is two to three times less expensive to build a traditional TGV. It can be added to existing structures, limiting the construction of bridges and viaducts, expropriations and land acquisitions.

The work carried out by IREQ and published in December 2010 establishes, with a very cautious assessment, that the construction costs for a first 250 km monorail line between Montréal and Québec City would be $ 12 million per km.

The costs of expropriation and ground development are reduced by using the central corridor of a highway or urban boulevard.

An update of these costs will be necessary, but the MGV will remain one of the least expensive means of transport to build.

For more details on this estimate of costs, you can consult Chapter 5 of the study of the Institute of Research in Contemporary Economics (IREC) "The electrification of public transit: a step towards the energy independence of Quebec".